Jan Cox Speas’s MY LOVE, MY ENEMY – Exciting Love Story Brings the War of 1812 to life! 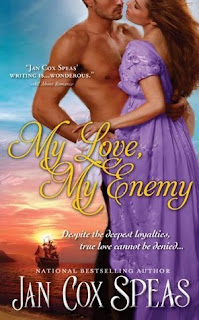 Set in 1813 in Baltimore, London, France and in the Atlantic, this is the story of an American girl and a British viscount. It is one of the wonderful historical romances that comprise the legacy of Jan Cox Speas.

Of the seven daughters born to Samuel Bradley, gentleman of the Chesapeake, Catherine Page (“Page”) was a rebel who tried the patience of Duncan MacDougall who worked for her father. But even he could not foresee that the bored 18 year old, wanting to spend her birthday money for some new frippery, would stow away on the small sloop Duncan sailed across the Bay to Annapolis to pick up her father’s Madeira. Once there, she manages to get into further trouble when she rescues a British gentleman from a local mob who want to hang him as a spy. When she and Duncan sail back to get the British man and his servant to safety, they run right into a British warship.

Taken aboard the English frigate, Page learns that the British gentleman she rescued is Jocelyn Trevor, Viscount Hazard of London.

Lord Hazard claimed to be in America to visit his sister though Page questions that. (He was an officer on Wellington’s staff, and it seemed odd that he’d be allowed to leave the Spanish front for family business.) In fact, he is the spy the mob in Annapolis accused him of being, though Page doesn’t know it. But since Page and Duncan MacDougall end up on a British warship because of him, Hazard vows he will see her safely back to her father.

This story reminded me of the statement of Bilbo in Lord of the Rings when he says to his nephew, “It's a dangerous business, Frodo, going out your door. You step onto the road, and if you don't keep your feet, there's no knowing where you might be swept off to.” Page steps out of her door and is swept away on one adventure after another as she gets caught up in the War of 1812 and the life of one particular British lord.

Speas allows us to see the conflicting emotions of those on both sides of the war. Lord Hazard is shamed by the British atrocities at Hampton, and Page experiences gracious treatment at the hands of the British officers when aboard their ship. Though there were several reasons America declared war on Britain, Speas deals specifically with the impressment of merchant sailors into the Royal Navy—sailors who considered themselves Americans. We also get to witness America’s clever privateers at work with the character Mason.

I love that Speas incorporates her extensive research of the history into this endearing and charming love story. It’s a bit lighter than her others but still quite wonderful!