Shirlee Busbee’s MIDNIGHT MASQUERADE – Love in Louisiana in 1814 as the Battle of New Orleans Approaches! 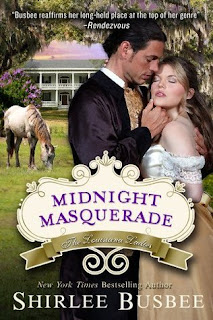 I love Shirlee Busbee’s romances because I know I’m going to diving into a deep story, one with rich details in the descriptions of places, people, food and history, woven together like a tapestry, providing a great background for her captivating love stories. This one is no different. Her seventh novel, it tells an intriguing tale of love in the time of the War of 1812 (referred to by its opponents as “Madison’s War”).

Set in Louisiana, beginning in the spring of 1814, this is the story of Melissa Seymour, whose greatest concern is surviving until her trust funds come in, which will only happen when her younger brother, 19-year-old Zachary turns 21—or she marries. Her uncle, who stands to benefit, urges her to marry, and yet Lissa is “unmoved by the most ardent admirer.”

To discourage the men who flock about her, Melissa disguises herself as a dowdy shrew. Her gift is horses and she has one stallion, Folly, who is magnificent and wins all his races. His prize money is keeping her and Zachary’s home of Willowglen afloat. Then enters one arrogant, wealthy bachelor, Dominic Slade of New Orleans, who wants to buy Folly and start a stud farm on his new estate close to Willowglen. Through a bizarre set of circumstances, they are caught together in his hotel room and forced to wed.

Busbee sets forth a shotgun marriage that grew into love against a backdrop of English spies in Louisiana seeking out Loyalists who can be counted on for the Battle of New Orleans that is coming.

Among the secondary characters is Jason Savage, the hero in Busbee’s Gypsy Lady. While the pace is a bit slower than more modern historical romances, fans of Busbee will not be disappointed.