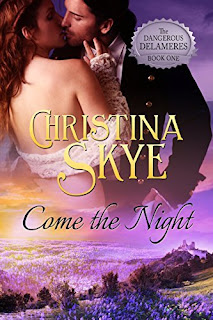 Set sometime in the Regency (since mad King George is referred to), this is the story of Silver St. Clair, the daughter of a famous perfumer who died without giving Silver the formula. Now she struggles to keep the lavender farm in Norfolk running even as she discovers her father’s diary that tells her both her parents were murdered. Evil men want both her and the farm. But she finds an ally in the mysterious highwayman, Lord Blackwood, who is actually Lucien Delemere, the eldest son of the Duke of Devonham.

Luc is a tortured soul with horrible memories of being abducted from London and swept away to an English prison hulk only to be rescued into a life as a warrior slave in Algiers. His good memories are of wide lawns and his family’s estate in Norfolk, but he has long since given them up and now lives as a rogue highwayman. That is until he meets the young innocent Silver.

The author does a wonderful job of bringing us into the business of lavender growing and the mysterious art of perfume making, at which Silver’s father excelled. Silver’s young brother, a delightful character, has the same skills. We experience Luc’s tortured thoughts as well as his burning desire for the girl he must deny himself.

The hero and heroine are compelling, as are the secondary characters, Luc’s faithful caretaker Jonas Ferguson and Silver’s protective friend Tinker. There’s even a faithful sheepdog.

So well done and definitely recommended.

Come the Dawn is book 2 in the Dangerous Delemeres