Sue London’s TRIALS OF ARTEMIS – Her Name is Jack And She Knows How to Fight, a Regency 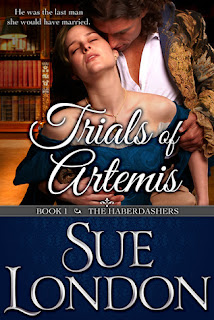 This is book 1 in the Haberdashers series though I might have thought it was book 2 or 3 by the references to other characters not in this story. The premise is clever enough: 3 debutantes who band together to form an unusual group, all committed, it seems, to self-defense. All take male first names: Jack, Sabre and George. That bit was disconcerting each time a sentence started with “Jack…”. But I digress. The dialog is clever, the banter witty, and the clash between the hero and heroine interesting.

Supposedly he comes into a library one evening thinking to have a tryst with a widow he has previously dabbled with. Instead, he finds Jack, a 19-year-old innocent who he takes for the widow. I’m not sure that works, even in the dark, but you get the picture. If he doesn’t marry her she is ruined. So, it’s a forced marriage.

There’s a fair amount of sex in this story, enough so that I skipped a few passages. There are references to historical events but we are not shown any happening. Still, it’s enough to tell you where you are in England’s history (the Regency just before Waterloo). Gideon is a stern bachelor who didn’t seem to have much use for women outside of the bedroom before he married Jack. And Jack is a practically perfect “wallflower” who suddenly blossoms (once she is married) into an irresistible young woman.