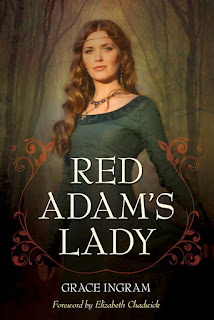 Set in the 12th century, during the reign of Henry II when “the young king” was aspiring to usurp his father’s throne, this is the story of Lady Julitta, a young lady without dower and seemingly without prospects until she encounters Red Adam, lord of Brentborough. Red Adam, so called for his red hair, in a drunken state, takes her for a tavern wench and decides to take her back to his bed chamber and show her a good time. He doesn’t seem to understand she is a virtuous lady who will not be trifled with. So she bangs him over the head with a wooden stool, keeping her virginity. But since he has “ruined” her in the eyes of all, he does the right thing and marries her.

Red Adam, a likeable guy, is loyal to the king and won’t hear of plots to take him down, thus drawing the ire and vengeance of his enemies. And once he weds the smart and savvy Julietta, he becomes the perfect gentleman.

The introduction by Elizabeth Chadwick might suggest this is historical fiction. It’s not, nor is it comparable to Chadwick’s work. This is romance, albeit good historical romance. It’s a story of civil war in England, of border raids by villainous Scots, scheming plans of aristocrats and daring escapes across the moors. There is lots of blood and guts; it’s not for the squeamish. And sometimes I had to read a sentence twice to get what she was trying to convey. Still, it’s a fast paced tale based on considerable research for historical details. I really enjoyed it.