Regan's Trip to the Western Isles of Scotland...the report! 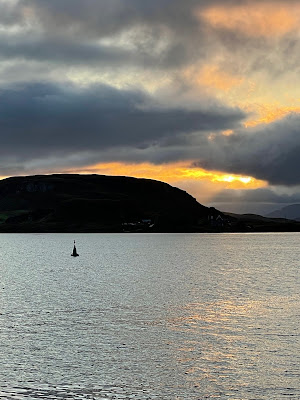 In addition to seeing this area by water via the Majestic Line’s wonderful small ships, I took a week with an expert guide from Clans and Castles who was knowledgeable in Clan Donald history. Together we saw 16 castles and other historic sites. I took many pictures, some of which I’ll show you here.

My goal was to get a feel for what the Islesmen experienced as they plied these waters in their galleys when the Lords of the Isles reigned as the great sea lords in the Medieval era.

Leaving the town of Oban on Argyll’s coast (Oban Bay is pictured above), we sailed north to Mull and Iona. The Isle of Mull, long associated with Clan Donald and those clans that were a part of the Lordship, is host to three castles.

Duart and Moy Castles were both MacLean holdings, and Aros, one of Somerled’s castles, eventually came back to the MacDonalds after Bannockburn. This is Duart in the fog. I was able to go through it and see its impressive great hall. 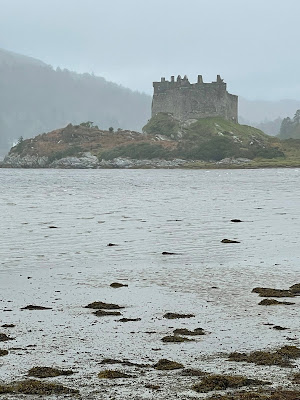 One of the things I realized was that the Islesmen were never out of sight of land. They knew these isles, every hill familiar, and would have looked upon them as their backyard, the waters between them their highways. Their castles are located on promontories jutting out into sounds and lochs where the enemy could be seen from a far distance. Though many are in ruins today, some are restored and others leave us with insights into what they would have looked like.

The weather was a constant factor, raining off and on most days. Wind constant. I kept thinking of the Islesmen in their galleys in rough seas, water splashing over the gunwales as they rowed toward their destination. The wind can whip up the water with little notice and a day that begins with sun can quickly turn into cloudy skies with sudden rain. (I learned this the hard way.) Wellies were essential! The Islesmen would have had fur-lined cloaks, oiled to repel rain, but they could still have wet feet and, absent a hat, wet heads.

Iona is a very special place. Lying off the west coast of the Isle of Mull the tiny isle is barely three miles long by one mile wide, yet it has had an influence greater than its size on the establishment of Christianity in Scotland, England and throughout mainland Europe.

Iona’s place in history was secured in 563 AD when, following St. Oran, St. Columba arrived on its white sandy beaches with 12 followers and built his first Celtic church and established a monastic community. 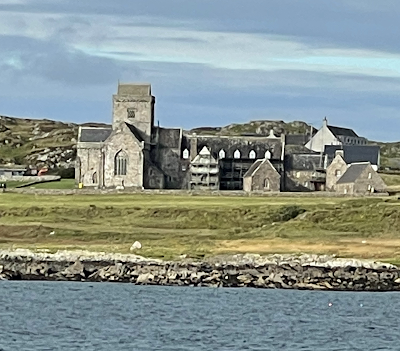 It was also the spiritual center of the Lordship, the chapel built by Somerled, the nunnery and church by his son, Ranald (the founder). The stone was red granite from Mull, the isle next to Iona. (Abbey and church pictured above.) Over the years, the Macdonalds maintained, enlarged and improved the Abbey and church, which would have been highly decorated and painted over whitewash in brilliant colors. Kings of Scotland, Norway and Ireland are buried here as well as the Lords of the Isles and their chiefs. In the book I am writing now, Bound by Honor, Angus Mor Macdonald’s burial will occur in St. Oran's Chapel, as it did in truth.

Each day I witnessed beautiful sunrises, some at sea, the colors sometimes muted and sometimes vivid and striking. This is the first sunrise I experienced on the way to the Isle of Mull. 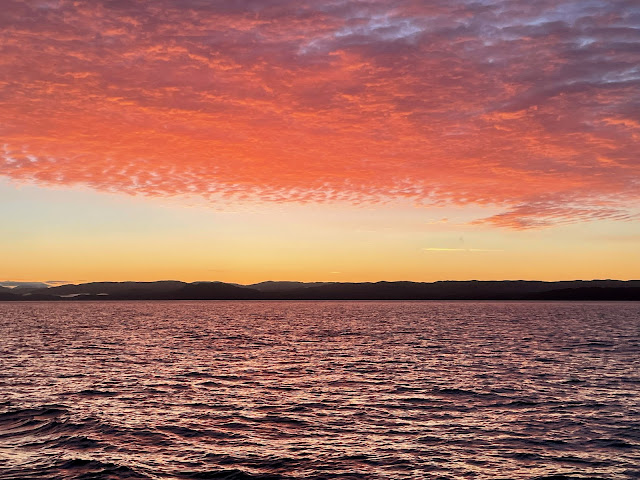 I also saw many rainbows, some were 180 degrees, which I had never seen before, but they would have been commonplace to the Islesmen who sailed these waters centuries ago. 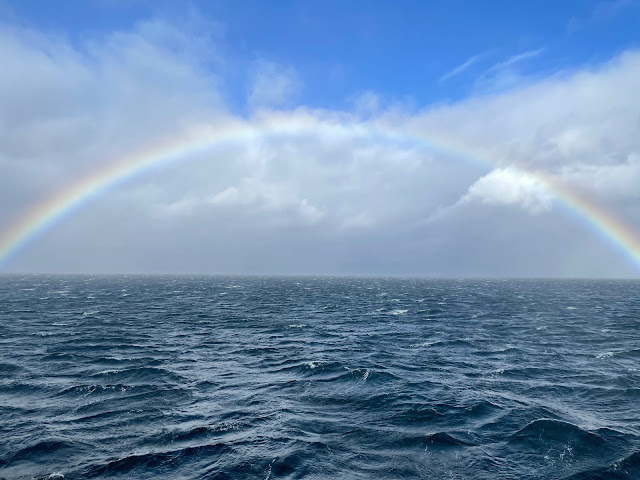 It was a great trip that made this part of Scotland real to me in a way that research, maps and pictures could not have done. I went to other places and isles than those mentioned here, including Ardnamurchan, Morvern and the Isle of Skye, and sailed around the Kintyre peninsula to the Isle of Bute. I will be putting all my photos and videos on a special Pinterest Board for the trip so you can see them. You can also experience the Isles in the medieval era in Summer Warrior, book 1 of the Clan Donald Saga. See it on my Website and read an excerpt!

Email ThisBlogThis!Share to TwitterShare to FacebookShare to Pinterest
Labels: Regan's Trip to the Western Isles of Scotland., Sharing Secrets