J. R. Tomlin’s NOBLE TRAITOR – Vivid story of some of the First War for Scottish Independence 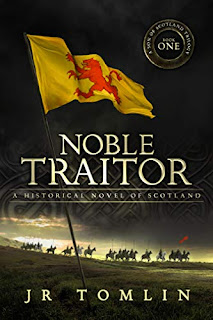 There were so many things I liked about this book, the depth of research, the medieval feel, the vivid descriptions of battles (some excruciatingly so) and the characters brought to life. But there were issues for me, too.

First, Thomas, the lead character, seemed very naïve for a knight. He is appalled at what he considers treachery and tricks on the part of his uncle, Robert the Bruce, to whom he is forsworn, yet he has no problem with King Edward’s utter cruelty. Thomas seemed unaware of the massacre of Berwick’s people just to prove a point or the brutal slayings of Robert the Bruce’s brothers and horrible treatment of his women by the English. So, for much of the book, Thomas was to me a weak and utterly ignorant man, seemingly unaware of what was at stake for the Scots and why they fought as they did.

Then there was this: the book ends abruptly, as if the author forgot to finish it. Loose ends are not tied up and relationships are left hanging. The end of the story is just the end of a battle. If the story continues in a subsequent book, then to my mind, this is not a “stand alone” novel. I got to the end and just stared at the page. So, what would have been a 5-star novel is not quite to that level. Still, it’s a good read.