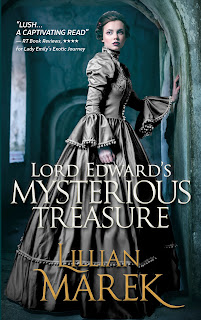 November is Victorian month on Historical Romance Review. I’m starting with one set in France.

Set in Brittany in 1871, this is the story of Lord Edward Tremaine, an Englishman summoned to the Chateau Morvan on the coast of Brittany by his friend Antoine (“Tony”) who claims there’s a treasure to find.

Ned travels to France where he discovers a strange collection of people. The old vicomte, who appears to be dying, insists Tony and his two cousins search for the treasure. One young cousin, Delphine, beautiful and captures Ned’s attention but, as time goes on, he notices there is something wrong with her. The other cousin, Marguerite, an accomplished pianist, appears stern and withdrawn. In truth, she worries about Delphine and providing for little family. Ned’s friend, Tony is worried about funding his steel factory and only seeks the treasure for what it can give him.

The story is well written but moves along rather slowly with a fair amount of repetition in motives and introspection. The romance between Ned and Marguerite develops only after he precipitously asks her to marry him. Marguerite is happy to share Ned’s bed but resists marriage because she is a commoner and he’s an aristocrat. (Ned and his family think nothing of it.) All that seemed a bit strange for the Victorian era.

The story picks up when a few secrets are revealed, Ned has an idea of how to find the treasure and his parents show up to find out what’s behind their son’s letters. All the threads come together for a satisfying end.