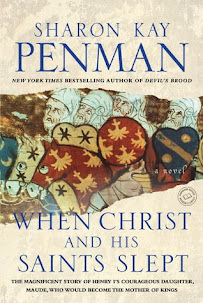 This story of England and France in the time of the Civil War between Stephen and the Empress Maude begins in 1135 A.D. and continues to 1154 A.D. As King Henry I dies, his barons faced the unwelcome prospect of being ruled either by Henry's beautiful daughter, Maude, Countess of Anjou, or her cousin Stephen, a great battle commander but a weak statesman. The Civil War that resulted from their struggle for the Crown was to wreak havoc on England and the lives of the common people as barons switched sides time and again.

Penman's novel is like diving into that time in the past. Most of the characters are real and those who are fictional will seem real to the reader. She weaves a splendid tapestry of medieval life and tragedy, even as the way is prepared for Henry II and Eleanor of Aquitaine and the Plantagenets. There is more than one romance in this story and all are well told.
Long at 738 pages, one has to love the history to linger so long in a novel. It seemed to me to get more exciting and more interesting as it went along, especially when young Henry fitz Empress shows up and we meet the delightful, smart and beautiful Eleanor of Aquitaine. Recommended for the lover of historical fiction (which I am).
“Regan Walker is an excellent reviewer. Doesn't pull any punches but praises good work. I trust her.”
SHIRLEE BUSBEE, NY Times Bestselling author