Sharon Kay Penman’s TIME AND CHANCE – The Love Affair of Eleanor of Aquitaine and Henry II brought to life! 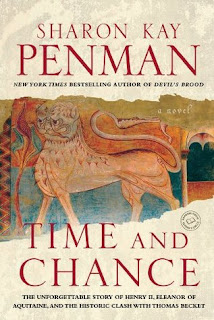 The story in When Christ and His Saints Slept continues with the story of Eleanor of Aquitaine and Henry II. It’s a captivating tale set in the 12th century, a story of a wonderful woman and a king who was often distracted by affairs of his kingdom and his mistress and not careful to let his wife know how she was valued. For that, he would pay a price.

It began with Thomas Becket, Henry’s closest confidant, who he elevated to be Archbishop of Canterbury. It ended with a perceived betrayal that made a royal murder seem inevitable. Along the way were enough scheming, seductions, and scandals to topple any kingdom but their own.

Penman weaves an intricate story that will draw you in with great attention to historic detail, making up for gaps in the historic record with wonderful fiction. Ranulf, Henry’s fictional uncle, returns to show us life in Wales, which I loved. There are some dark moments with the murder of an archbishop and a Welsh prince. The ending is clearly a transport to book 3 so it leaves many questions unanswered.

The Henry II and Eleanor of Aquitaine Trilogy: