Victoria Holt’s THE SHIVERING SANDS – A love story wrapped in a mystery! 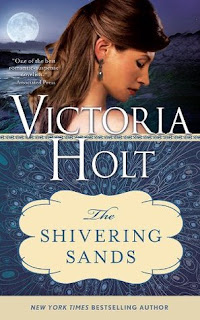 Set in the late Victorian era, this is the story of Caroline Verlaine, a young widow, who has lost her archeologist parents and her brilliant pianist husband to untimely deaths, and now her sister Roma has disappeared. Determined to find Roma, who went missing while on a dig in Dover, England, Caroline, who is a pianist herself, takes a job in the area—as a resident piano teacher to Sir William Stacy’s three young charges. One of the girls is the illegitimate daughter of the heir, Napier Sands, and another of the young women is his wife.

Caroline tells no one she is the sister of the missing woman. Soon, she finds there are other mysteries at the Stacy home, including Napier’s past in which he killed his older brother, in what may or may not have been an accident, and the “shivering” sands off shore that swallow ships. Caring little for his young wife, who is afraid of him, Napier makes a project out of Caroline, telling her, “You and I are like those ships. We are caught in the shivering sands of the past. We shall never escape because we are held fast, held by our memories and other people’s opinions of us.”

When a new curate shows up at the village, he joins Caroline in solving the mystery of what happened to her sister, and what is now Napier’s missing wife. And danger draws close as Caroline’s life is threatened.

Holt did an excellent job of creating a mystery with no clear villain but many who had motives. And despite that it takes place in virtually one location, there is much happening with some great secondary characters, including Sybil, the batty old sister of Sir William, Napier’s father, and of course, the three young women. At one point I thought the mystery itself dragged a bit, but as with all novels by Holt, the finish is excellent.

It’s a mystery, a love story and a story of new beginnings, choices and redemption. Told from the first person, you are only in Caroline’s head but the hearts of others are revealed through dialog. A worthy read, I recommend it.