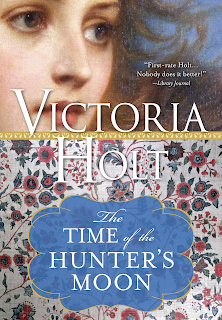 This is the story of Cordelia Grant, raised by her beloved Aunt Patty when her missionary parents died in Africa. Aunt Patty was a joy to live with. She ran a school for girls that Cordelia was educated to one day take over. But events led to another route and Cordelia ends up teaching at a different school.

According to legend, a girl will see her future husband at the time of the hunter's moon. When she was still in Germany where she had gone to a school to be “finished”, Cordelia meets a handsome stranger who told her he was Edward Compton. She later learns that the young man of that name died 20 years ago.

Meanwhile, while teaching at the new school, she meets the landlord, Sir Jason Verringer, a wealthy, compelling man about whom swirl rumors of his having murdered his wife. And he wants Cordelia for his next wife.

Holt does a wonderful job of bringing Cordelia’s world to life. Told in the first person, we are only ever in Cordelia’s head so we feel her emotions. She is a wise young woman, discerning others’ intent. She deals well with her students and the determined Sir Jason though she finds him intriguing. As always with Holt’s stories, there is mystery. Whatever happened to Edward, the man to whom she was drawn like no other?

If you like Victoria Holt, you’ll enjoy this one.