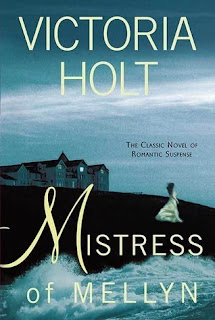 Set in Victorian England in Devon, Cornwall, this is the story of Martha Leigh (“Miss Leigh”) who, at 24, comes to Mount Mellyn to become the governess to widower Connan TreMellyn’s young daughter, Alvean.

After all, what’s an educated woman with no parents and no prospects to do?

Miss Leigh soon discovers that Alvean is spoiled, hard to manage and suffering from too little of her father's attention, which might explain the departure of the last three governesses. In addition to Alvean, there’s a mysterious young child, Gillyflowers, who sings to herself and whose mother committed suicide. Martha determines to win both children and show Connan he is wrong about them all.

So she teaches Alvean, who supposedly can’t ride a horse, to ride well. And she begins to teach Gilly, who all think a bit daft, to read.

But there’s a mystery surrounding Connan’s wife’s death and the goings on around the large house on the edge of the sea that soon capture Martha’s attention. And, despite her better judgment, she is beginning to fall in love with the master of the house.

Holt does a masterful job of drawing us into the mystery—into the secrets of the family’s past—and there are many in this mystery. Oh, yes, there is a surprise at the end.

I love Victoria Holt's Gothic mysteries, usually centered around an old house with secrets and some evil lurking in the shadows. This one is set in Cornwall and Holt captures the people wonderfully. I couldn’t put it down and found myself looking forward to diving into “Miss Leigh’s” puzzle solving for my bedtime reading.