Dorothy Dunnett’s THE GAME OF KINGS – Brilliant Storytelling in a Complicated Plot! 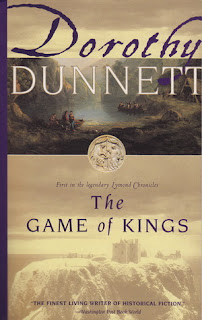 December is Favorites Month and I’m starting with one that is not only one of my favorites but that of many authors.

It’s set in 16th century Scotland when the country’s future was at stake and the young Queen Mary was a sought after bride by both England and France. This is the story of Francis Crawford of Lymond, a nobleman who, through unfortunate events, ends up on the outside of the law, the head of a band of broken men. He has a sharp, witty intellect and is capable of dangerous endeavors.

In 1547 Lymond returns to his native Scotland, which is threatened by an English invasion. Accused of treason, he takes a risky path seeking to bring the truth to light, redeem his reputation and save his land. A hero in disguise, mistrusted by most, Lymond has many supporters still willing to rise to his defense.

Lymond is a charming, noble soul you will not be able to resist. Though often blamed in error for others’ crimes and treason, he rises above it all. Dunnett presents him an undefiled hero to be loved. And so he is.

This is an exceptionally well-told tale with passages that made me stand back in admiration. Even so, there were several places where I wasn’t at all sure what was going on or who was speaking. But these were minor detractions in light of the overall brilliant writing and great story. I couldn’t stop reading and am now on book 2 in the wonderful Lymond Chronicles. Highly recommended for fans of historical fiction with a charismatic hero.