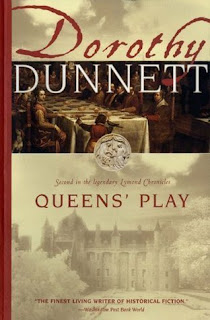 Set in the 16th century, this is the second in the Lymond Chronicles and follows Francis Crawford of Lymond’s further adventures, this time in France where, at the request of the Dowager Queen of Scots, he guards the young Queen Mary. Disguised as an Irish bard and often drunk, he manages to keep danger from the young queen and win many hearts at the court of the King of France. As in the first book, he is accused of crimes he did not commit but manages to save the day through his sword and his agile wit. He is joined by some noble Scots, some Irish characters, including a young Irish king, and a menagerie of animals.

A great installment in a wonderful series, I loved it! The characters, the suspense and the intrigue are very well done and Lymond charms. This time he also takes an Irish beauty as his lover—for one night. Highly recommended.