Catherine Coulter’s DEVIL’S EMBRACE – Enthralling 18th Century Story of Capture and an Earl who acts like a Pirate! 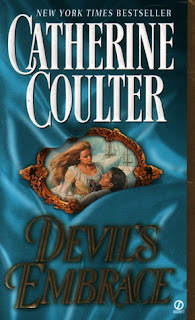 This was Coulter’s first historical romance, published in 1985, and it is a superbly written, heart stopping, action-filled story that I could not put down. Literally. I do not recommend you begin it in the evening as I did. That night I did not sleep until nearly dawn. Forget the low reviews, and set aside your 21st century sensibilities and go with what may be one of the most enthralling romances I’ve read in a long time. Certainly it’s a classic that affected the genre of historical romance—and well worth the read just for that!

Set in the late 18th century (based on events in the story, I estimate 1775-76) in England and Italy, it tells the story of highborn 18-year-old Cassie Brougham, who on the day before her marriage to a Viscount she has loved for years, is abducted by 34-year-old Anthony Wells, the half Italian Earl of Clare, who has been watching her since she was a child all the while believing she is his perfect mate. Though Anthony’s intention is marriage, that doesn’t stop him from rape to claim her, nor imprisonment, first on his yacht and then in his Italian villa, as he tries to persuade her to marry him. Cassie hates him for what he has done to her life (as well she should and Coulter does that really well), but succumbs to the passion he calls forth each time he makes love to her.

You can feel the terrible conflict within this strong-willed, courageous girl as she feels she has no choices. Even her attempt to escape comes to naught.

The plot is intricate and intriguing with lots of action and lots of mystery. The characters are richly drawn, including the hero who has a noble side notwithstanding his selfish and brutal act of taking another man’s bride. He really does love Cassie.

The heroine really garnered my sympathy. She faces mad dogs and Englishmen and manages to overcome every challenge to gain the respect of all. I highly recommend this one.

The second book in the duology is Devil’s Daughter.