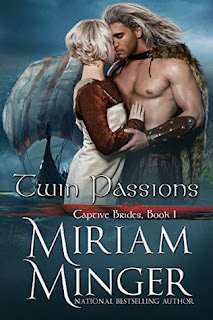 I loved this story though it has some improbable elements and missed details. Even with these detractions, however, I found the story absorbing and it kept me reading late into the night. I recommend it.

Set in England and Norway in 973-984 AD, when King Edgar ruled the Anglo-Saxons, it tells of two beautiful twin sisters who are captured by a Norwegian Viking merchant’s men and taken back to his home in Norway. One of the sisters, Anora, is betrothed to (and in love with) Wulfgar, a prince of Danelaw—a marriage arranged by King Edgar. The other sister, Gwendolyn, is a tomboy who wears her hair short and trained with their father’s men as a warrior. Yet she is still the virtual double of her beautiful sister. Both girls had many suitors in England.

Though the sisters were taken against Hakon’s orders, and he recognized by their speech and mannerisms they were highborn, he tells them they will be his slaves in Norway (“Norge”) and will not be returned to England. In this, Hakon looked less than noble. He lusted after Anora and wanted her for himself, so he also appeared selfish. His own actions were contrary to his admonishment to his crew that they not become involved with the Anglo-Saxons.

What Minger did well: an intriguing plot, wonderful characters (Gwen was wonderful, particularly in the first half), excellent reflection of the historical setting, good dialog, superb writing, great action scenes and a fast-pace read (this stuff is hard to get right so it counts for much!).

But there were things that detracted:

Minger tends to “head hop” from one character’s mind to another (I counted 5 points of view changes in the first two chapters). While this doesn’t usually bother me, her changes came so rapidly and sometimes for only a sentence or two that it distracted. Then, too, in more than ten instances, while in Hakon’s point of view, he thinks “Gwendolyn” when he should have thought “Garric”; and in at least other 5 instances he should have thought “Anora.” That was confusing.

I was following the logic of the story, really hanging in there, until half way through the book when the brilliantly defiant Gwendolyn, who’d been masquerading as the lad Garric and protecting her sister while hating Hakon for what he’d subjected them to, takes her sister’s place when Anora is summoned to Hakon’s bed. I saw Gwen’s action as noble and was cheering her on, but after they had sex, all her anger, hate and resolve to escape just dissipates into nothing. I expected her to be even angrier after that since she, a noble born Saxon, had been forced to become a Viking’s whore. But no…all Hakon’s people think it’s “special” that she is now the chieftain’s “concubine”, and Gwen apparently sees no problem with it. I couldn’t fathom that, not in an era when a young woman’s purity was her greatest possession. This total turnaround in Gwen’s emotions came too suddenly to be believed.

--No one, not even Hakon, ever asked the two captives who they were, nor did either of the sisters tell Hakon that they were the daughters of the Earl of Cheshire or that Anora was betrothed to a prince of the Danelaw. That seemed bizarre when it might have protected them if not returned them home.

--When the head Jarl tells all the chieftains (including Hakon) they are searching for two Anglo-Saxon sisters taken captive because if the girls are not returned, it will mean war with Denmark and England, no descriptions or names are given to the chieftains to help them find the sisters, nor do any ask. That didn’t seem logical.

--Gwen (in disguise as Garric) was whipped with the lash and while suffering welts on her woman’s skin, went to Hakon’s bed and he never noticed her welts and she never winced as he embraced her. Even naked in her bath none of the women noticed anything. How was that?

--During the whole story, no one noticed the difference in muscles or callouses between the two sisters, yet Gwen had been rowing the boat with the men for days and well as saddling horses. To me this was an omission, especially since Hakon was sleeping with Gwen thinking she was Anora. And very late in the story, Hakon wonders how a brother and sister can look so much alike. He also never considered she would be pregnant though he was bedding her each night, all of which made him seem highly unobservant and a little dense.

Finally, which of the sisters did Hakon love? Anora, Gwen, or both? It was Anora he came to know and desire on the boat ride to Norway, and after they arrived he was obsessed with having her. But he has sex with Gwen when she went to his bed pretending to be her sister. It was Anora that Hakon wanted but he got Gwen. Yes, he tells Gwen he loves her after a night of passion, but is it really Gwen he loves, or Anora—or both? Lastly, he never apologized to Gwen for taking her honor though her father and Wulfgar would kill him for it. What a cad!