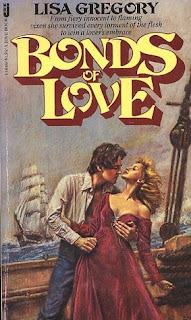 What can I say about this book? It’s a well-written page-turner, a bodice ripper and Lisa Gregory’s (aka Candace Camp’s) first novel, published in 1978. Set during the Civil War, it tells the story of Katherine Devereaux, the only daughter of a wealthy Boston shipbuilder, who is abducted by one of the Confederate prisoners working in her father’s shipyard.

Katherine is witty, independent and capable, and when we first meet her in Boston, she is intent on marrying a Union naval officer, Lt. William Perkins. But that plan would soon change.

Captain Matthew Hampton is arrogant and selfish. He desired the haughty Miss Devereaux from the moment he laid eyes on her. And since he takes what he wants, when he escapes with a ship and his men, he kidnaps Katherine and takes her to sea, and then to England. In Katherine’s own words, “He stole me! He raped me! And now he refuses to release me, locks me in here like a dog in its kennel.”

When she does escape him in England, it is to a terrible fate. I kept thinking all the while it is Hampton who is responsible for ALL her misfortune since he abducted her in the first place. For me, it was sort of a “loved her, hated him” story. When he finally comes to realize he loves her, he just couldn’t grovel enough to compensate for what Katherine experienced. I just could not like him, no matter how contrite he became. To my mind the real hero here was the constant Lt. Perkins, who still wanted Katherine even after all she had experienced.

For all that, if you’re looking for a good bodice ripper with a very worthy heroine, I recommend it.