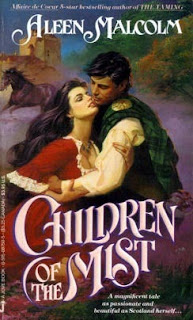 This is not my first by Malcolm and there is a reason. She writes great stories.

Set in France and Scotland in 1764, this is the story of Kat MacGregor, daughter of the banished MacGregor clan who promised her dying mother she would care for her siblings, both older than Kat. For five years she has fought to protect her ailing younger brother and her vulnerable older sister, knowing that if their identity as MacGregors is discovered once they return to Scotland, they could die.

Sir Darach Campbell, Lord of Strathrannoch and Glengrian, knows Kat holds the secret to his missing brother, Riach, and so intends to hold the “ragged chit” close. In front of witnesses, he announces he and Kat are wed. In Scotland, that constituted a valid marriage. Once he decided to make her his wife, Darach begins to acknowledge the fascination he had for her from the first moment he looked into her green eyes five years before in France.

So begins a tug of war as Kat tries to escape to get back to her brother and sister and Darach fearlessly hangs on, all the while trying to solve the mystery behind his wee bride and his missing brother.

I loved both the hero and the heroine. Kat is young but fearless, clever and undaunted by the young Campbell lord. Darach is tenacious yet tender with Kat (well, most of the time). While there is not much history, you can tell Malcolm has done her research with the Gaelic sprinkled throughout and the fear that was real for any MacGregor.

Malcolm does a superb job of keeping us in suspense and turning pages. It’s a great read and highly recommended for readers who love deeper Scottish historicals, which I do. Malcolm is also the author of The Taming, book 1 in the Cameron trilogy, which I also recommend. I consider them all “keepers”.