Carmen Caine’s Heather House: Witch of the Moors – A Well-Written Story of Scotland at the time of King James’ Witch Hunting 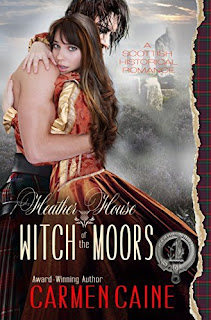 Set in Scotland in 1589, this is the story of Sorcha Cunningham, a girl gifted with the second sight, who is sent by her guardian (a witch if there ever was one) away for her own safety. Sorcha flees to her relative, Margaret Cunningham, who has wed Robert Montgomery, Earl of Eglinton, per the king’s command.

At the center of the story is an old feud between the Montgomery and Cunningham clans that the marriage of Robert and Margaret was intended to end. Alas, it did not. Margaret plots to get rid of her husband.

Robert’s younger brother, Alec Montgomery, free of the demands of the title, is the peacemaker in the family and spends his time having fun. But as the story begins, a mysterious old hag tells Alec he will one day be the earl and the last of his line, but how can that be when he has many brothers?

Sorcha has dreams that foretell coming horrors, but her guardian tells her she must face her destiny, for happiness lies on the other side. Meanwhile, King James begins a witch-hunt and Sorcha’s terrible fate draws ever closer while she’s melting in Alec’s arms.

The story reflects solid research and Caine is meticulous in detail, which put me in the setting. It’s well written, which I so appreciated, however, there are some dark aspects with Sorcha’s dreams providing an evil foreboding through much of the tale.

Alec is charming, falling for Sorcha the first time he sees her, no matter she is a commoner and a maid. His cousin, Taran, is an interesting fellow who adds the brooding Scot aspect to the pair. I must say King James comes over like a dolt, his changeable nature explained away by his fear of the Highland clans. Now that sounded interesting but perhaps it’s coming in a future story.

All in all, it’s a great read if the subject of witchcraft and evil perpetrated on innocent women doesn’t scare you off.