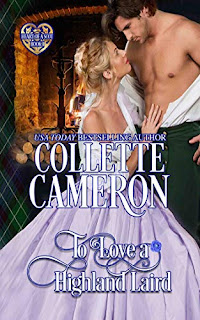 Set in the Highlands in 1720, this is the story of Logan Rutherford, Laird of Lockelieth Keep, who was betrothed when he was six to Mayra Findlay, then a baby. They meet again when she is eighteen. He has decided to pose as his lookalike cousin, Coburn Wallace, to get a look at his soon-to-be bride. At issue is her dowry, half of which Logan’s father squandered before he died and the other half which Logan needs to save his lands.

Mayra thinks her absent betrothed is uncaring—he never answers her letters—and so she is determined end it. Besides, she needs the remaining half of her dowry to save her family’s home. But she needs Logan’s help and the king’s permission. When she meets the handsome Coburn Wallace (never realizing he is Logan), she has another reason—she has fallen in love.

This is #1 in the Heart of a Scot series and it’s a good start, a witty story well told of Logan and Mayra’s slide into love. Cameron tosses in some unusual words and phrases that will make you smile and some Scottish brogue that gives the story an authentic feel. Well done!