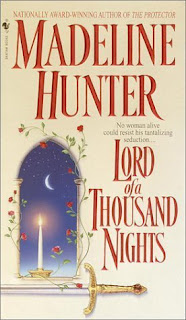 Set on the Scottish border in 1357, this is the story of an English knight, Ian of Guilford, dubbed “Lord of a Thousand Nights” for his prowess with women, and Lady Reyna Graham, a widow who is desperate to save her people and her home, Black Lyne Keep, from Ian’s assault. One night, she sneaks out and into his tent, posing as a prostitute. She thinks to kill him, however, Ian knows women and he knows this one is not an experienced woman.

Following her retreat back into the keep, he finds the passage that allows his men to take the keep without a siege. Once captured, she and her people are under his control. There is a fair amount of suspense, witty banter, and sex, as well as some good secondary characters to keep you entertained.

Ian turns out to be nobler that one might think initially. And Reyna is a well-loved noble heroine of good intentions gone awry. There’s mystery in their backgrounds and Hunter does a great job of revealing those at the end.

This is the last of Hunter’s 14th Century London Medieval series and some of the couples in the other stories are characters in this one. All are highly recommended:

Lord of a Thousand Nights