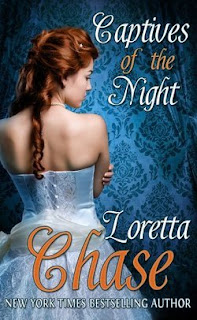 I bought all the romances in this loosely woven series before I read one of them. They include The Lion’s Daughter, set primarily in Albania, Captives of the Night, Lord of Scoundrels, and The Last Hellion. The last two are as related as the first two.

Captives is set in Paris and London. It’s the story of Leila Beaumont, a brilliant artist, who through a series of events, is forced by circumstances to marry a degenerate, who actually loves her but is incapable, as a result of his own bad choices, of being a good husband. She decides to shut him out of her bedroom but she remains celibate and faithful.

Meanwhile, her husband basically lives his separate debauched lifestyle. Now in her mid 20s, Leila comes to the attention of the handsome and sophisticated comte d’Esmond (who is the attractive villain Ismal from The Lion’s Daughter but with a new identity). They first meet in Paris and later, in London, where Leila and he are thrown together to solve a murder.

The sexual tension is well done and runs high throughout. Both are interesting and attractive people and have much to bring to a relationship. There are secrets lingering from The Lion's Daughter so you'll want to read that before this one. (The secrets are interesting and worth discovering.)