If you consider that my work is writing historical fiction, then I suppose my “pet at work” can be one of my characters. My wirehaired pointing griffon, Cody, sleeps much of the day near me, but as I was writing Rogue Knight, in my mind, I was striding through the streets of 11th century York, England with a huge wolfhound trotting at my side.

In Rogue Knight, such a dog is Magnus, the heroine’s Irish wolfhound. At the time of my story, York was Anglo-Scandinavian in culture having at one time been the capital of the Danelaw, so all the character names for the locals are Scandinavian. And the heroine, Emma, is of Danish extraction.

Magnus, her wonderful companion was named after one of the kings of Norway. He is very like the dogs described in the Icelandic sagas, such as that of Burnt Njal in which Olaf, son of an Irish princess, offers his friend Gunnar a hound from Ireland:

“… it is part of his nature that he has man’s wit, and he will bay at every man whom he knows to be thy foe, but never at thy friends. He can see, too, in any man’s face whether he means thee well or ill, and he will lay down his life to be true to thee.” 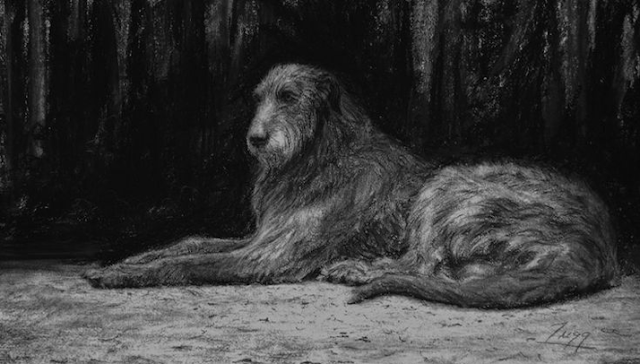 Magnus was a gift from Emma’s father, Maerleswein, a leader of the rebels who join with the Danes to rise against William the Conqueror. The only Norman Magnus seems to like is the hero, Sir Geoffroi de Tournai, an honorable knight. Clearly the hound has good taste.

Since Magnus is always at Emma’s side, protecting her, I imagine him keeping me company, too, as I wrote this story of Emma’s life in medieval York.

"A vivid portrayal of love flourishing amidst the turbulence of the years after the Norman Conquest."

The North of England seethes with discontent under the heavy hand of William the Conqueror, who unleashes his fury on the rebels who dare to defy him. Amid the ensuing devastation, love blooms in the heart of a gallant Norman knight for a Yorkshire widow whose family is aligned with the rebels.

Angry at the cruelty she has witnessed at the Normans’ hands, Emma of York is torn between her loyalty to her noble Danish father, a leader of the rebels, and her growing passion for an honorable French knight.

Loyal to King William, Sir Geoffroi de Tournai has no idea Emma hides a secret that could mean death for him and his fellow knights.

War erupts, tearing asunder the tentative love growing between them, leaving each the enemy of the other.

Will Sir Geoffroi, convinced Emma has betrayed him, defy his king to save her?