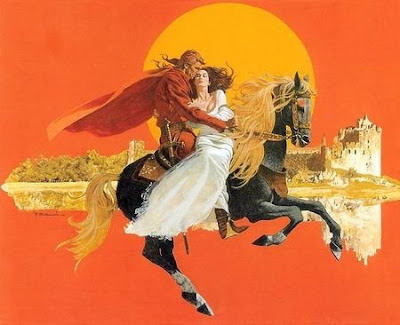 Who among us ladies hasn’t dreamed of a knight in shinning armour? Or, of living in a time when valor prevailed and honorable men did great deeds and women of character loved them? (I did say we were dreaming, right?) Well, these historical romances will take you back to those medieval times.

Since the medieval period in European history spanned the 5th century to the 15th century, all the stories on my list take place during that period; however, some Scottish, Irish, Viking and Pirate/Privateer historicals from that time period not listed here can be found on those specific “Best Lists” (found on the right side of my blog).

A Kingdom of Dreams by Judith McNaught
Betrothal by Jenna Jaxon (the first part of a 3-part story)
Bianca by Bertrice Small (1st in the Silk Merchant’s Daughters series)
Blackheart by Tamara Leigh
Blue Heaven, Black Night by Shannon Drake (aka Heather Graham)
Bond of Blood by Roberta Gellis
Bride of the Lion by Elizabeth Stuart
By His Majesty’s Grace, By Grace Possessed and Seduced by Grace by Jennifer Blake
By Possession, By Design, Stealing Heaven, By Arrangement, The Protector and Lord of a Thousand Nights, 14th century London series by Madeline Hunter
Candle in the Window by Christina Dodd
Come the Morning, Conquer the Night, Seize the Dawn, Knight Triumphant, The Lion in Glory, and When We Touch from the Graham series by Shannon Drake (aka Heather Graham)
Crimson Secret by Janet Lane
Damsel in Distress by Shannon Drake (aka Heather Graham)
Desire of the Heart by Katherine Vickery (aka Kathryn Kramer)
Enchantress, Kiss of the Moon and Outlaw, Welsh trilogy by Lisa Jackson
Everlasting by Kathleen Woodiwiss
His Stolen Bride by Shelly Thacker
Honor & Roses by Elizabeth Cole
Impostress, Temptress and Sorceress, Welsh trilogy with fantasy elements by Lisa Jackson
Keeper of the Dream by Penelope Williamson
Knight’s Honor by Roberta Gellis
Lady of Fire, Fire and Steel and The Fire and the Fury from the Fire Series by Anita Mills
Lady of the Forest by Jennifer Roberson
Lady of Valor from the Warrior trilogy by Tina St. John
Laird of the Wind by Susan King
Lespada by Kathryn Le Veque
Lie Down in Roses by Shannon Drake (aka Heather Graham)
Lily Fair by Kimberly Cates
Lord of Desire, Lord of Temptation and Lord of Seduction, Risande Family trilogy by Paula Quinn
Lord of Vengeance by Tina St. John
On a Highland Shore and Rivals for the Crown by Kathleen Givens
Princess of Fire and the sequel Knight of Fire by Shannon Drake (aka Heather Graham)
Prisoner of My Desire by Johanna Lindsey
Rose of Rapture by Rebecca Brandewyne
Shadowheart by Laura Kinsale
Siege of the Heart by Elise Cyr
Silk and Steel and the sequel Desire and Deceive by Cordia Byers
Silverhawk by Barbara Bettis
Spellbound by Nadine Crenshaw
Sword of the Heart by Maureen Kurr
The Angel Knight by Susan King
The Bedeviled Heart by Carmen Caine
The Black Lyon by Jude Deveraux
The Breaking Dawn by Jayne Castel
The Bride Gift by Sarah Hegger
The Christmas Knight by Michele Sinclair
The Conqueror, Promise of the Rose and The Prize, trilogy by Brenda Joyce
The Deepening Night by Jayne Castel (7th century Britain)
The Dragon Tree by Marsha Canham
The Falcon and the Flower, The Dragon and the Jewel and The Marriage Prize, the Plantagenet trilogy by Virginia Henley
The King’s Pleasure by Heather Graham
The King’s Rebel by Michelle Morrison
The Last Knight by Candice Proctor
The Lily and the Falcon by Jannine Corti-Petska
The Lion’s Bride by Connie Mason
The Outlaw Knight (aka Lords of the White Castle) by Elizabeth Chadwick
The Raven and the Rose by Virginia Henley
The Rose of Blacksword by Rexanne Becnel
The Rose of York: Love and War, The Crown of Destiny and Fall From Grace, trilogy by Sandra Worth
The Swan Maiden and The Stone Maiden from the Maiden trilogy by Susan King
The Warrior’s Game and Spring’s Fury by Denise Domning
The Wild Hunt by Elizabeth Chadwick
The Wolf and the Dove by Kathleen Woodiwiss
Through a Dark Mist, In the Shadow of Midnight and The Last Arrow, Robin Hood trilogy by Marsha Canham
Uncommon Vows by Mary Jo Putney
Untamed, Forbidden and Enchanted, trilogy by Elizabeth Lowell
Warrior Poet by Kathryn Lc Veque
Warrior’s Song, Fire Song, Earth Song and Secret Song, medieval series by Catherine Coulter
When Love Awaits by Johanna Lindsey
Where Love Dwells by Elizabeth Stuart
Winter’s Heat by Denise Domning
Wonderful, Wild and Wicked, trilogy by Jill Barnett

And, if you will allow, I hope you will consider my own Medieval Warriors series: The Red Wolf’s Prize (winner of the RONE Award for Best Historical Novel, medieval), Rogue Knight, Rebel Warrior and King’s Knight.
Posted by Regan Walker at 2:00 AM