The Theaters-Royal in Drury Lane and Covent Garden confined their season to the autumn and winter. Sadler's Wells filled the gap with their shows during the spring and summer. From the playbills I reviewed, the Theatre-Royal at Haymarket seems to have operated nearly year round.

In addition to the major theaters holding thousands, there were many other options for the theatergoer in the Regency:

The Haymarket (King's Theater) Opera House was originally built by the architect and playwright Sir John Vanbrugh in 1705. Destroyed by fire in 1789, it was rebuilt and used extensively for opera.


The Lyceum Theater first became a “licensed” house in 1809 and was rebuilt in 1816, and renamed The English Opera House. It was famous for being the first theater in London to feature some gas lighting (1817), and for hosting the London première of Mozart’s Italian opera Così fan tutte.

The Pantheon, constructed on Oxford Street in 1772, was originally designed for balls and masquerades before becoming an opera house in 1791. It was converted to a theatre 1811-12 and was the setting for the great Commemoration of Handel performance in 1784, which will be seen in Echo in the Wind. But the Pantheon's role in the theatres of London was to be short lived. Damaged by fire and troubled financially owing to irregularities in its license, it was replaced in 1814 by the Pantheon Bazaar.
The Adelphi Theatre, originally named The Sans Pareil, was constructed in 1806 by merchant John Scott to showcase his daughter's theatrical talents, and was given a new facade and redecorated in 1814. It reopened in 1819 as the Adelphi, named after the area of West London built by the brothers Adam from 1768. (The name "Adelphoi" in Greek means "the brothers.") Among the actors who appeared on its stage was the comedian Charles Matthews, whose work was so admired by young Charles Dickens. Most of its patrons were the salaried clerks of barristers and solicitors.

The Olympic Theatre was a playhouse built from the timbers of the French warship "Ville de Paris" (the former deck serving as the stage). It opened as the "Olympic Pavilion" in 1806. After financial losses, in 1813, it was sold to Robert William Elliston, who refurbished the interior and renamed it the "Little Drury Lane" by virtue of its proximity to the more established patent theatre. It was rebuilt in 1818.


The Royalty Theatre was opened in 1787 by the actor John Palmer in defiance of the 1737 patent monopoly act and featured as its first production As You Like It. Without a proper license, however, it was forced to close. Palmer was arrested. Under the management of William Macready, the Royalty continued on, struggling with pantomimes and burlettas (comic opera). In 1816, it was renamed the "East End Theatre," and continued to offer entertainment until it was burned down ten years later.

So, as you can see, the people in Regency London were definitely fond of their entertainment. And with thousands enjoying the theatre each evening, they were fond of the stage! 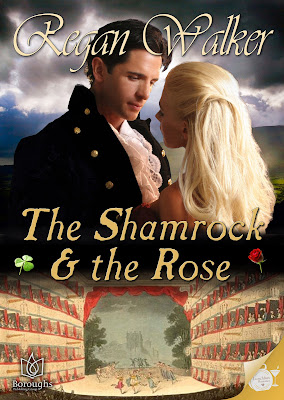 A stint playing Portia at the Theatre-Royal at Haymarket in London, a dropped valentine and a dangerous desire lead gentle-born Rose Collingwood into the arms of handsome Irish barrister, Morgan O’Connell, whose love will hazard all she is.

"...never failing to provide her readers with good storytelling, compelling plots and interesting characters, Walker's research is meticulous, thus producing that special something to her writing that makes it a page turner..."   --Amazon reviewer


The Shamrock & The Rose is guaranteed to put you in the Valentine's Day mood... and you can read it again for St. Patrick's Day! 99¢ on Amazon.

"A great short story of suspense and romance; I loved it and can't wait to read more by Ms. Walker."
~ Sinfully Tasty Reads
Posted by Regan Walker at 1:00 AM