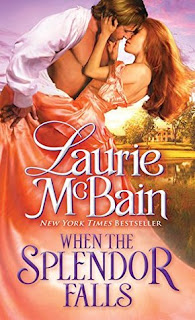 Regrettably for lovers of historical romance, this was McBain’s last novel. I have read, reviewed and loved all of them (see list below). McBain was a part of the seminal group of authors who ushered in the modern historical romance in the 70s and she stayed for the booming 80s to give us more wonderful, well-written and deeply emotional sagas. As if she knew this would be her last, she took her time with it, slowly developing the tapestry of the two Southern families whose lives were intertwined before, during and after the terrible conflict known as the Civil War.

Leigh Alexandra Travers, of Travers Hill in Virginia loved her home, her family and her horses for which the Travers family was famous. Neil Braedon was from the branch of the Virginia Braedons that went west to the Territories. He was captured by Comanches as a child to become the warrior “Sun Dagger,” then later rescued and sent east to school, graduating from Yale. One day, seeing Leigh in the woods, he mistakes her for a lady’s maid and steals a kiss—her first. Both were forever changed by the encounter. Neil wanted Leigh as no woman before and Leigh was no longer content with her handsome, wealthy gentleman fiancé, though she would wed him to save her family from financial ruin. Neither Leigh nor Neil spoke of the deep feelings they had for each other.

Then the war intervened and changed everything.

McBain meticulously presents the devastation the Civil War brought to the two families as Leigh and Neil are separated by years (and more). Her family fights for the South and Neil becomes the Yankee raider known as “Captain Dagger.” The descriptions are vivid and rich, the dialog amazing and the story satisfying. As a sample, thinking about Leigh, Neil reflected,

“She was like the willow on the riverbank. She bent to the winds that swept across Travers Hill. She had adapted gracefully to the changes that had come so tragically into her life. She hadn’t broken trying to resist, to fight against a far greater force that would have destroyed her. Nor had she been weakened by the struggle, she had become stronger, finding a strength within that she might never have known otherwise.”

This is a sweeping saga, and a love story that develops across years. (It’s a long one, too, at 678 pages in my print edition). For fans of McBain, as I am, it will not disappoint. It's a keeper!

Moonstruck Madness (1977) Sabrina and Lucien
Chance The Winds Of Fortune (1980) their daughter Rhea and Dante
Dark Before The Rising Sun (1982) Rhea and Dante (cont’d.)
Posted by Regan Walker at 6:11 AM