Heather Graham’s WHEN WE TOUCH – Jack the Ripper, Queen Victoria and romance…Oh my! 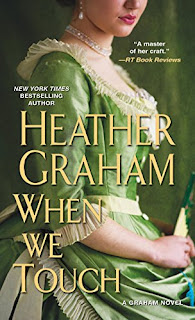 Set in Victorian England after the death of Prince Alpert, this is the story of Maggie, Lady Graham, an independent woman. Though she had her pick of the men in the ton, she fell in love with a police officer and married him. After two years of wedded bliss, he was killed in action. Now the still young and beautiful Maggie lives with her brother Justin and her friend the author Mireau. Maggie’s passions are helping the poor women of the East End, mostly prostitutes, and exposing the spiritualists who would fleece the poor in spirit. But her brother's gambling debts force her to accept her uncle's plan for her to wed the old but very illustrious Lord Charles Langdon, friend of the Queen, who has coveted her since her first Season.

Prior to the wedding, murders have begun in London that are causing panic everywhere. No woman is safe and certainly not one like Maggie who goes to the unsafe parts of the town for her work among the poor. Meanwhile, she and Lord Charles’ nephew, Jamie Langdon, have found they cannot resist each other. Though she is falling in love with Jamie, to save her brother and the family, she intends to wed the old but kind Lord Langdon and to make him a faithful wife. Before they are wed, she and Jamie know a night of passion. All of the characters become absorbed into the melee that is Jack the Ripper.

The story is well told though at times I did find myself skipping over some of the historical parts that seemed to take too much away from the romance between Jamie and Maggie. Shannon Drake (the early pen name for Heather Graham and the original author of the book) does a good job of capturing a turbulent time in London's history and giving us an insight into what it must have been like. Her work is well researched, well written and her romance compelling. This is the 7th in her “Graham saga” though less related that the earlier ones. Still, it’s Graham and I love her stories!
Posted by Regan Walker at 1:00 AM