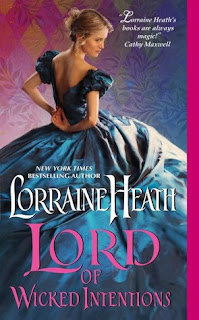 Set in the mid-1800s, this is the third in the Lost Lords of Pembrook trilogy. Had I known that, I might have started with book 1. By the time we get to Rafe’s story, it is clear that much has taken place in the lives of the three brothers who were imprisoned by an uncle. But they escaped awaiting the day when they would return to reclaim their birthright.

Lord Rafe Easton was the one who escaped to survive on his own in the streets of St. Giles. Now the owner of a successful gambling hall, he is wealthy and has shunned his two brothers who left him in a workhouse as a child. He is bitter and determined to need or love no one…until Eve comes into his life.

After her father's death, Miss Evelyn Chambers, an earl's illegitimate daughter, thinks her half brother intends to find her a husband as he promised her father he would see to her needs. However, he has in mind something quite different and offers her to the highest bidder among the lords who want a new mistress. And Rafe Easton, invited to the bidding because Evelyn’s brother owes him much, decides to have her.

When Evelyn is taken to Rafe Easton’s home, she assumes it’s to be his housekeeper. She is shocked to learn he expects her to be his mistress.

A great story of redemption and the power of love to change a heart. I enjoyed this story and will read more of the trilogy. Lorraine Heath’s stories are always emotion-packed and powerful. A wonderful Victorian romance.
Posted by Regan Walker at 1:00 AM