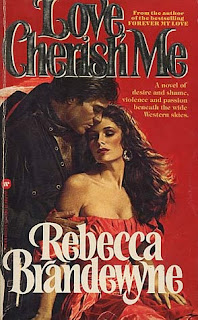 When I finished this book, it was so good, I found myself wanting a sequel. Alas, there is no sequel, but And Gold Was Ours gives us another glimpse of Storm and Wolf.

Who could not love Wolf (El Lobo)? He is a man haunted by his past in an era where bad men seized lands to impose cruel dictates. We don't learn the complete story of Wolf's past until the end, but it's worth the wait. As for the heroine, Storm Lesconflair, the belle of New Orleans, she starts out as an indulged 16-year-old given every advantage, but when her parents die, her life takes a plunge. Rising to every challenge, she becomes a beautiful woman of grace, intelligence and depth. And their love is the love of legends.

The romance is divided into five "books" and spans the time period 1848 to 1866. The first chapter shows us the present, 1866, and it's almost an epilogue that can be skipped till the end (I re-read it after I’d finished the book). Then we are back at the beginning, in 1848, and Storm is being forced into an arranged marriage with a rich, cruel Texas rancher she doesn't love. On her way to meet him, a gang of outlaws overtakes her stagecoach and Storm is taken captive. She is then won in a card game by the gunslinger they call El Lobo, thought to be a half breed Indian but a man all men fear and respect. The darkly handsome gunslinger, dressed in black and silver, seems to have honor and would give her freedom, but Storm prefers his company to the thieves and scoundrels in the bar. So she follows him...

The story unfolds as we travel from New Orleans high society of the mid 1800s to the Texas frontier to San Francisco and then back to Texas. Along the way, Brandewyne introduces us to some wonderful characters, including a group of Comanches who are Wolf's adopted family, and we get to learn about the Indian culture, which had much to suggest to the white man.

If you like romances that sweep you away and the story of love that conquers overwhelming odds, you will love this story. I highly recommend it.