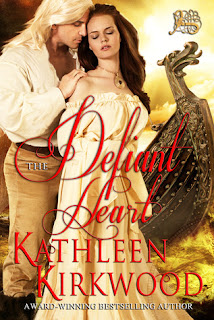 Viking month continues with one of Kathleen Kirkwood’s absorbing tales. This second story is set in 915AD and begins as a fleet of Danish drakken dragon ships attacks Eire (Ireland) to rape and pillage. Ailinn, a poor relation of the princess Rhiannon, was seized with the other young women attending Rhiannon’s wedding. But Ailinn was not raped with the others, which infuriates her cousin, Rhiannon, who assumes it’s because Ailinn wore the bridal veil in a last minute switch of attire.

Once the Danes arrive in their homeport of Hedeby, Lyting Atlison encounters them and is drawn to Ailinn’s beauty. Lyting, born a Dane, lives in Francia where his uncle is Duke Rollo. Apparently (possibly in book 1) Lyting was spared some fate that caused him to want to become a monk, but his brother, Rurik, thinks Lyting should take a wife and settle down.

Lyting first tries to buy Ailinn, not to have her but to spare her a horrible fate. When he discovers she is destined for a harem in Byzantium, he joins the fleet that will carry her there. And then the adventure begins, and oh, is it ever an adventure: from Danmark (Denmark) to Constantinople, through dangerous river rapids and deadly river pirates.

I liked Kirkwood/Gordon’s well-researched, detailed writing—obviously based on impressive research. I could “see” the places and people they described, hear the birds and feel the movement of the ships. I could taste the heroine’s fear.

The author clearly made an effort to make this an authentic Viking tale set in the history of the time, hence women taken as slaves were mistreated and raped. No surprise there. Gordon does it tastefully. The author also made an effort to date the speech to the period, which I appreciated. (I prefer historicals that don’t read like contemporaries.)

There were a lot of characters to keep track of but the author did a good job of providing descriptions. And there were many place names mentioned (a map would have been nice). All the same, the story drew me and kept me reading. Trust me, some of the scenes will have you on the edge of your seat!

Brienne and Rurik, hero and heroine in book 1, are characters in this story and there are lots of references to their story and the characters from that story. I also had the feeling I missed some of Lyting’s story that took place in book 1. It helps to begin at the beginning. So, read them in order.

Lyting was a “to die for” hero and Ailinn proved to be the most honorable of the women, looking after her frail cousin, Diera. I recommend this story and will definitely read more of the trilogy, perhaps beginning with book 1.