Johanna Lindsey’s GENTLE ROGUE: A Rogue Pirate and a Viscount 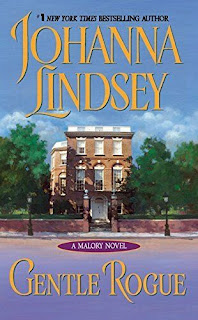 Set in 1818, the Regency period, this 3rd in Lindsey’s Malory series is a worthy read. After all, it’s got a handsome hunk, a pirate and love on the high seas (some of my favorite stuff!).

James Mallory was a pirate for some time. Though now reformed and a Viscount, he still sails the seas when he gets the urge. And, he is still a rake. Seducing women, even virgins, is fair game for him. So, when he realizes that the enticing girl he encountered in a tavern dressed as a lad has just boarded his ship disguised as a boy named Georgie, he decides to make her his cabin boy with the idea of getting her into his bed. No concern she might be an innocent (and there is much evidence of that), or that having seduced her, he might hurt her or worse--get her pregnant (we're talking months at sea...). No, that wouldn't bother him. After all, he already has one bastard he knows of, his 17-year-old son Jeremy, and he routinely seduces married women. In fact, he has a very low opinion of women just because they are so easy to seduce. At that point, I just wanted to flatten the cad. And, make no mistake he is a cad.

When James' ship arrives in Jamaica, and Georgie goes to her brother's ship, docked in the next berth, she acknowledges to herself she is in love with the rake and that she is also pregnant. But she is realistic enough, even at 22, to know the confirmed bachelor means it when he says he'll not marry. So when her brother's ship sails away to New England, leaving her no time to tell James good-bye, she resigns herself to going home alone. Now, if this were real life, she'd never hear from James again, right? Ah, but this is a Johanna Lindsey romance. Sooooo, there will be more story and a happy ending. Call that fantasy perhaps, but it works well here.

A great installment in the Mallory series, even if you do have to suspend belief to accept that Georgie could be that naïve and that a jaded reprobate like James could actually have a heart. The book reads well and keeps up a fast pace. And I love the Malory banter. At least half of the story occurs at sea on James' ship. The rest takes place in London and New England. I recommend it.
Posted by Regan Walker at 11:22 AM