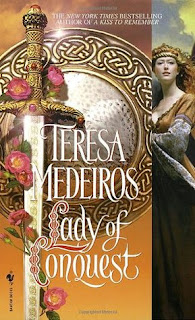 Set in Ireland (Eire) in the 2nd century at the time when the High Kings reigned, this is the story of Conn of the Hundred Battles (a real historic figure), who as High King governs Eire through the Fianna, his legion of warriors. When Conn learns that someone is killing his men, he goes in search of the killer and finds Gelina O’Monaghan, who, along with her brother, is taking vengeance on Conn for destroying her family.

Since Gelina seems to Conn more a child than a woman, he decides to take her as his foster child. Back at Tara, Gelina develops a crush on the man who allowed her to live when he could have taken her life. Conn tells Gelina that he killed her brother when he (and she) attacked him, but in truth, Conn does not know if the brother lives. In the time that follows, Gelina defies Conn at every turn while falling in love with him. It’s a battle of wills and they come to both love and hate the other.

It’s a story that will hold your attention though there are some improbable moments and perhaps some disturbing elements (the bodice ripping comes late but it does involve rape). Then, too, Conn believes the worst of Gelina in places where the evidence would suggest otherwise. He is strong and stubborn. She is strong and resourceful, and will not suffer his betrayal easily. I liked her for that.

Medeiros has written a page-turner and included some wonderful secondary characters, perhaps my favorite being the dwarf Nimbus, who befriends and trusts Gelina and would marry her if he could. Some of the dialog is witty and endearing. I can recommend it but just be aware of the elements I mentioned.