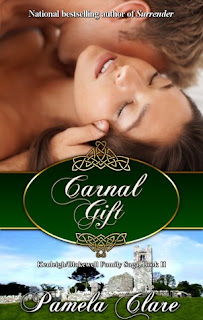 This is the second in Clare’s Blakewell/Kenleigh Family trilogy and it’s a good one.

Set in Ireland (and some in England) in 1751 (prologue), 1754 and 1756 (epilogue), it tells the story of Jamie Blakewell (brother to Cassie in SWEET RELEASE), an Englishman with a tobacco plantation in the Colony of Virginia, who has returned to England to try and persuade Parliament to provide money for ships to defeat the French and their Indian allies in the war that has just begun.

To help Jamie with the House of Lords, he seeks the aid of a friend from Oxford days, Sheffield, Lord Byerly, whose lands lay in Ireland. On a hunt in Ireland, they come across some Irish Catholics illegally observing their faith while conducting a child’s funeral. Among them is 18-year-old Brighid whose beauty catches Jamie’s eye. While debauched Sheff would kill the priest and throw the rest in prison, Jamie argues for their lives. Without his knowing it, while Sheff appears to release them, he actually plans to kill the priest and take Brighid as a gift for Jamie. But Jamie is of noble heart and when Brighid is brought to him against her will, he only pretends to have his way with her.

Clare weaves a complex tale that puts us in the heart of the Irish-English conflict in Ireland and the persecution the Catholics faced. She creates some wonderful characters who will live long in our hearts. She also gives us a picture of what brought people to America and the blending of the classes in the New World.

It’s a wonderful love story and I highly recommend it.