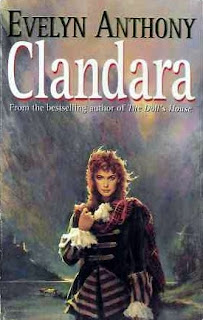 Set in 1745, in the time of feuds between the clans and the Scottish support for Bonnie Prince Charlie, this is the story of Katherine Fraser who falls in love with the eldest son of her family’s enemy—the MacDonalds. James MacDonald had a horrible reputation of cattle stealing, killing and debauchery when he met the lovely, flame-haired Katherine Fraser. For love of her, he changed. Neither family wanted the marriage but agreed to a betrothal when they could see the pair was determined.

Then came Charles Stuart and the call to arms all over Scotland. Having lost all in the earlier rising in 1715, Katherine’s family declined to go. Their enemies, the MacDonalds, were in the forefront of the clans supporting the prince. In one horrible act, James tears asunder the love that bound him to Katherine and sealed forever the enmity between his clan and hers.

This is a poignant love story very well told. Anthony vividly portrays the emotions of the Scots at the time of the Jacobite Uprising of 1745 and her description of the English slaughter of the Scots on Culloden Moor was brilliant and detailed. She shows you why King George’s son the Duke of Cumberland earned his title “Butcher.” By the time you get to the battle, you are so invested in the characters and the clans, your heart is racing.

The romance is an unusual one as James and Katherine are separated for much of the story, yet ever in each other’s mind. I loved them both but Katherine really shined as a woman trying to do the right thing under dismal circumstances. The ending is a bit like jumping off a cliff and I found I wanted more of the two of them.

If you like well-researched, detailed history in your historical romance, and you can’t get enough of Scotland’s past, then you will love this one. Highly recommended.